On Sunday 24th January 2016, during the week of Christian Unity and the Orthodox week of Theophany and with the Bishop’s blessing, we were delighted and privileged to welcome the Russian Orthodox Church of the parish of St. Nicholas the Wonderworker in Oxford to St. James for the “Blessing of the Water”, a service which commemorates the baptism of Christ by St. John the Baptist. Before we began, the priest, Father Stephen Platt, took time to explain a little about the Orthodox Church and the form the service would take (warning us that we might get a little wet), but reminding us that we all worship the same God albeit in different ways. During the service we remained standing for the prayers which were chanted with responses from the choir. We sat for the several readings from the Bible, Isaiah in particular. Having blessed the water in a large copper vessel the priest walked down the aisle dipping a flail into the water and sprinkling the congregation, symbolising a new baptism. We were then invited to approach and kiss the Cross when again we were anointed with water. 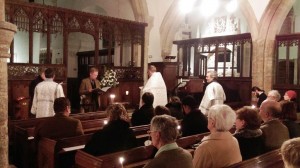 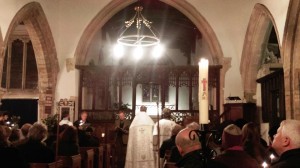 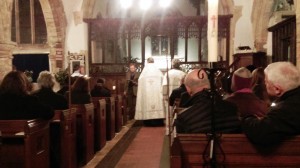 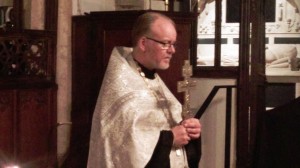 The Church was quite full not only with visitors from the Oxford parish but with many villagers who had come to participate, some maybe from curiosity, however I think we were all agreed that we were glad to have had the opportunity to join in unity with another branch of the Christian faith.

A big thank you to  Father Stephen for the time he took in talking to us before the service began, in explaining that the Julian calendar was used, and that, unlike in our own Church, the Orthodox services have changed very little over 1000 years, it helped a great deal in our understanding. Thanks also to the other clergy who attended, the choir and the members of the Orthodox Church who live in the village for arranging this unusual and very moving service.