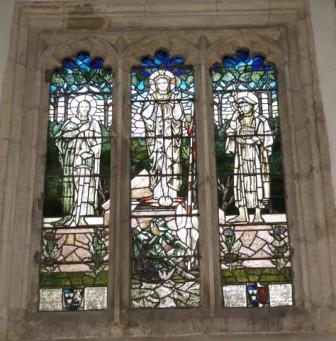 The magnificent window at the East end of the North aisle is an early work by Christopher Whitworth Whall (1849 – 1924), the leading designer and maker of stained glass in the Arts & Crafts Movement. The Somerton window is notable for its simple but effective colour scheme of deep blues combined with silvery white and off-white tints of glass. The figure of the sleeping soldier below the Risen Christ is shown wearing elaborate armour. Whall designed this suit and had it made in cardboard to be worn by the model who posed for the Archangel Michael figure! The window was made under Whall’s direction by the London firm of James Powell & Sons.

This memorial to William Barnes, father of George Edward Barnes (Rector of Somerton 1875 – 1923) was installed in the church on the 29th September 1893.  The cost, (charged to Whall) of making the window, is recorded in the Powell firm’s archives as £46. The real cost to the Barnes family must have been substantially more to cover Whall’s charges for design, and full-sized working drawings from which the stained glass was fabricated.

Christopher Whall was an important member of the Arts & Crafts Movement. He was born in Thurning in Northamptonshire where his father was the Rector. After schooling at Rossall School, against his parents wishes he decided to become an artist and enrolled at the Royal Academy Schools. After extensive travels in Italy, and freelance design work in London for other manufacturers, in 1887 he moved to rural Surrey to establish his own studio and workshop. It was here in 1890 he designed and made his first independent commission, the Lady Chapel East window of St Mary’s church, Stamford, Lincolnshire. Other Whall windows can be seen in the Lady Chapel and Chapter House at Gloucester Cathedral, Canterbury, Winchester, Worcester, Leicester and Dornoch Cathedrals, and in many parish churches throughout the UK, as well as in Ireland, France, Australia, South Africa and the U.S.A.