We Congratulate Rosemary Arnold recipient of a High Sheriff Award 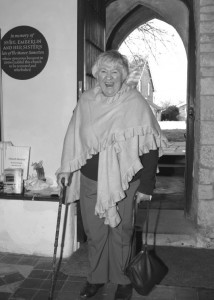 These awards are made annually to recognise people in Oxfordshire who have made an outstanding contribution to the communities in which they live and work and who have had a high impact on the lives of others over a sustained period of time. They are recognised by their peers as inspirational and setting an example for others to follow. Awards are made on the basis of nominations received. Rosemary, accompanied by her husband Malcolm and Alan Mitchell, her nominator, received her accolade on Monday 2 nd March in Christ Church, Oxford, (the day was made even more special as it was also her birthday). On the Saturday following she was lured, under false pretences to St James’ Church, Somerton, where she was surprised by a gathering of at least 70 well-wishers where tea and cakes were enjoyed by all.